Patterns and processes of biological invasions in freshwater and terrestrial ecosystems

Insects are among the most successful invasive species but there are surprisingly few aquatic insects that invaded freshwater ecosystems. In this collaborative project between WSL and Eawag we are analysing several international datasets to determine why insects are under-represented among aquatic i

This project contributes to the Blue Green Biodiversity Research Initiative - an Eawag-WSL collaboration focusing on Biodiversity at the interface of aquatic and terrestrial ecosystems.

Drought & beech: Effects of the 2018 summer drought on beech on the northern side of the Alps

In this project, we investigate causes for the impacts of the extreme summer drought 2018 on the vitality of beech trees in different regions of the Swiss Plateau and Jura.

Extreme climate events are expected to become more frequent with climate warming. We test genetic differentiation in resistance to late frost and drought in silver fir populations planted in the 1980s in Swizterland and abroad.

Wildfire, insect attack and windthrow in mountain forests are on the rise again

Recent Scots pine mortality in forests of the upper Rhone valley have been suggested to be caused by climate change. In an ongoing PhD study, effects of different climate parameters and interspecific competition on the regeneration of both Scots pine (Pinus sylvestris) and black pine (Pinus nigra) are tested.

Only 150 years ago, Swiss forests were markedly affected by agro-forestal uses. In many places leaf litter was collected for different reasons. By experimental removing of the leaf litter, we examine the ecological consequences of this forest use and we evaluate it's potential as a new tool for nature conservation in forests.

Ground vegetation is a powerful bio-indicator of the environment. The project aims at discriminating the various factors which may influence the dynamics of ground vegetation. Emphasis is being given to the role of nitrogen.

Gossner, M.M.; Wohlgemuth, T., 2020: Do we need squirrels everywhere? On the distinction between biodiversity and nature. In: Krumm, F.; Schuck, A.; Rigling, A. (eds), 2020: How to balance forestry and biodiversity conservation. A view across Europe. Birmensdorf, European Forest Institute (EFI); Swiss Federal Institute for Forest, Snow and Landscape Research (WSL). 133-145.

After the forest fire of Leuk during the 2003 heat wave, plant and animal species re-colonized the 300 ha large are in short time. From 2004 to 2007, re-vegetation was observed on 150 systematically arranged permanent plots. Results showed a first peak of plant species richness only 3 to 4 years after the fire. By one or two master theses, both diversity succession and tree regeneration success may be further quantified. Hypotheses to test: 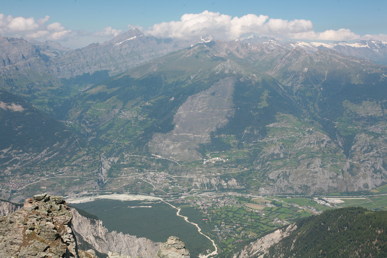 <br/>Ground vegetation is a key component of forest ecosystems. It contributes to the biological diversity of the forest ecosystem, plays an important functional role in the water and nutrient cycle, and interacts strongly with other biota, as habitat or source of nutrients. In addition, ground vegetation is a powerful bio-indicator of the environment, as the species composition of a plant community reflects the ecological conditions at a given site and at a given time. Vegetation surveys are therefore core assessments in the intensive forest monitoring programme (Level II) implemented within the International Co-operative Programme on Assessment and Monitoring of Air Pollution Effects on Forests (ICP Forests, www.icp-forests.org). In Switzerland, 17 ICP Forests Level II sites were established in the mid-1990s or later, within the framework of the Swiss long-term forest ecosystem research programme (LWF, www.lwf.ch). Ground vegetation was first surveyed on all 17 sites in 1994/1998, using two approaches: 1) classical phytosociological relevés in large plots (up to 500 m2); 2) visual assessment of the cover of each species (in %) occurring in 1 m2 vegetation quadrats. In these quadrats, the height and position of all tree seedlings and saplings were also inventoried in order to assess the development of natural tree regeneration.

Vegetation surveys were repeated in 1999, 2001 and 2003. Parallel to these vegetation surveys, hemispherical photographs of the canopy and measurements with a portable light sensor system (Licor LAI-2000) were made at the sites in order to assess potential light conditions, as light is a main driver of vegetation dynamics.

to interpret the observed changes in vegetation using the documented changes in light conditions and other relevant information (e.g. stand history, past occurrence of storms, management, atmospheric deposition…)

Voraussetzungen: Good knowledge of the Swiss flora, high flexibility. As hemispherical photographs and Licor measurements can be made only in the absence of direct solar radiation, field work may have to be done until late in the evening.